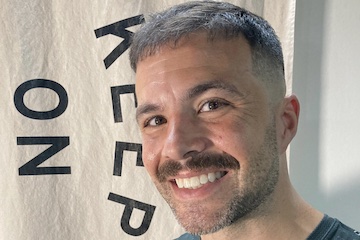 Peter Keller launched Fringe Sport in 2010 to help folks assemble home-based gyms. He also wanted to make a lot of money. “I was very financially motivated,” he told me.

Then he attended a seminar a few years ago that focused on a company’s purpose, its mission. He spoke with employees and customers. He discovered the real value in Fringe Sport.

“Technically, Fringe Sport is a strength and conditioning equipment company,” he said. “But the improvement in people’s lives, that was the magic. We exist to improve lives through strength.”

Identifying a company’s purpose was one of many topics that he and I addressed recently. Our entire audio conversation is embedded below. The transcript that follows is edited for length and clarity.

Peter Keller: I started Fringe Sport because I built an amazing gym in my garage, and it was harder than it needed to be. That was 11 years ago. I dismantled that gym, racked it out, and started selling barbells, kettlebells, weight plates, and similar out of my garage.

Keller: I’ve always shared all of this stuff that I do wrong. So bear with me here for a couple of examples.

First, I founded Fringe with my brother. He was my co-founder. We had one of the dirtiest, worst, most painful business breakups that you could possibly imagine without lawyers getting involved.

I also had an employee steal six figures from me. It smacked us down and made me feel like an idiot. Before that, I’d looked at other people and said, “How stupid. You didn’t notice $100,000 going missing?” Then it happened to me.

Bandholz: Your transparency has helped others, no doubt. I tend to share things too. It’s a form of therapy. I’ve lost five figures, not through theft, but just from incompetent product launches. It’s not fun. What is Fringe about now?

Keller: I’m involved with the Entrepreneurs Organization. I attended an EO program a few years ago from someone who had worked closely with Simon Sinek, the author of the book “Start with Why.” The presentation described a “Find Your Why” framework and workbook. I loved the program, except for that presentation. I was like, “Start with why. That’s millennial bull crap. Why can’t these people just go to work and then go home.”

A few months later, I ran into the fellow who ran that program. I told him I loved everything except the “Find Your Why” stuff. He went full stop, saying, “You are missing something massive here. Buy that book, spend 10 hours on it. If it’s wasted, I’ll apologize to you. But I don’t think it’s going to be wasted.”

So I bought the book, and I started working through it. It talks about helping customers and receiving feedback from them, such as, “Thank you for this.” The book suggests reviewing all of that feedback to find the commonality. Then go to your employees, and ask them about the customers that they’re proud of helping. What are the deals that they care about?

At first, your employees will say, “I sold this guy $10,000 worth of stuff. I made a good commission.” But they’re not really proud of that. Ask them what really filled their heart.

So I asked a bunch of our employees. Their stories coalesced around customers who had come to us, gotten some barbells, weight plates, something like that. Then they came back and said, “Look at the weight that I lost. Look at the competition that I won. My wife was struggling with depression. She started lifting weights, and the depression’s gone.” The stories revolved around lives that improved through strength. Technically, Fringe Sport is a strength and conditioning equipment company. But the improvement in people’s lives, that was the magic.

As part of the process, I traveled throughout the country to where customers were using our products. I went to a ton of garages all over the U.S. I also went to a bunch of CrossFit boxes, a bunch of powerlifting gyms.

I saw our customers. We exist to improve lives through strength.

There’s one other thing on the “Find Your Why” framework. I found my personal why. In the early days of Fringe Sport, the why was not to improve lives through strength. It was so that Peter Keller does not have to get a job. That’s not an acceptable why to anyone except me and, possibly, my wife.

Bandholz: I’m a believer in core values, brand, mission. When you think about building a business, as a new entrepreneur, there’s a lot of glamor. There’s the Gary Vaynerchuk’s, the Tai Lopez’s. There’s seemingly a ton of freedom, private jets, travel.

Beardbrand’s mission is to make men awesome through grooming. We get stories from our customers, which I put in my book of reminders. Becoming mission-oriented allows us to do things beyond merely selling.

Keller: I fumbled around for years until I figured that out. I was very financially motivated when I became an entrepreneur. I had been working for an ecommerce business for 10 years. I had worked my way up in that company. I saw the CEO become very wealthy, which I respected. I thought, “I should be the one who’s getting wealthy.”

But obtaining wealth is such an empty goal because money’s not going to love you in the morning. Your significant other will, your kids will. And your customers will if you do it for the right reasons.

Bandholz: The more value you bring to the world, the more wealth you’ll generate.

Keller: Yes, but I’m stuck now on leadership and developing employees. I am struggling because we reached another level of scale last year that I’d only dreamt of. My dreams are coming true in terms of our impact on the world. But we are dealing with new problems. I’ve always been a workhorse — to fix things, to solve problems, to develop products. Now, I am suddenly running my largest organization.

We have about 30 employees. The company is successful. We’re helping our customers. But I’m not succeeding at it the way that I need to. I don’t know how to unlock that level of leadership.

Bandholz: You’re a longtime contributor to Practical Ecommerce. Beyond that, where can people learn more about you and Fringe Sport?

Keller: You can find me on Twitter, although I’m not very active, @petekeller. I’m also on Instagram and LinkedIn. Our company is at FringeSport.com.

Incidentally, I have a funny story about oversharing. One year I invited all 40,000 people on our email newsletter list to my house. I didn’t clear it with my wife first.

I said in the email, “I’m having a party on January 1 in Austin, Texas. Anybody who wants to come, just reply to this email, and I’ll send you my address.” Twenty or so people replied, saying, “I’ll be there.” I sent them my address. I then told my wife, “Hey baby, we have some guests coming by.” She hit the roof. Rightly so. I’m an oversharer.