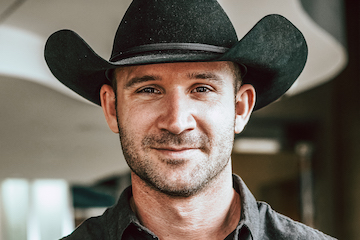 The idea for Chisos boots started with back pain. Will Roman, the founder, owner, and lifetime cowboy-boot buyer, injured his back in a motorcycle accident. Wearing boots became painful.

“I started cutting open boots to see how they were made,” he told me. “I found that those supposedly handmade boots were using plastics. I wanted a comfortable, handmade, high-end cowboy boot that you could work in, beat the heck out of, and then brush it off and go to dinner with the lady.”

The result is Chisos.com, a handcrafted bootmaker that Roman launched in 2019. Quality and craft drive Roman and his outlook on life. He and I recently discussed the company, bootmaking, and more.

Our entire audio conversation is embedded below. The transcript that follows is edited for length and clarity.

Bandholz: Where did the name Chisos come from?

Roman: I’ve worn boots my whole life. I’m a Texan. In my 20s, I had a couple of motorcycle accidents. One messed up my back. Wearing boots became painful.

I was out in West Texas one day, looking down at my feet. It was a long day. My back was killing me. I didn’t plan on starting a business. But I really wanted a comfortable pair of boots. I used to put Walmart inserts in boots, buy boots too big, goofy things.

I started cutting open boots to see how they were made. I studied all the bootmakers in Texas. Then I went to Mexico for several months, learning the process of making boots.  Most “handmade cowboy boots” in America come from four factories in Leon, Mexico. They’ve got 350 people on the floor at one time. You can go down there and see a dozen different brands all coming off the same assembly line. They’re all basically made the same.

When I started cutting open these other boots, I found that those supposedly handmade boots were using plastics.

I wanted a comfortable, handmade, high-end cowboy boot that you could work in, beat the heck out of, and then brush it off and go to dinner with the lady.

Bandholz: What do we have here? Listeners cannot see this, but you are holding a boot. I’m looking at it.

Bandholz: I love the smell of leather. Again, listeners cannot see, but my nose is deep into the hole of your boot.

Roman: We do some interesting things with this boot — all based on the Big Bend region. We embroidery into the boot images of native rock carvings. It takes about four weeks to make one pair. We don’t use calfskin.

Everything on our boot is unique, from the toe shape to the arch support. I had to think about how I would wear it and how to make it last forever.

If you look inside the boot, down at the bottom, the thick leather insole is hammered in. It’s three times as thick as our competitors’ models. It’s essential for leather taking the form of your foot. It’s leather, leather, leather, all the way on the bottom. Our boots get more comfortable over time.

Bandholz: Let’s talk about the business. You’re a small company, a bootstrapped bootmaker.

Roman: Absolutely. We manufacture all of our boots — many sizes and versions. We don’t use plastics, canvas, or glue. We don’t outsource. We make something to use for the next decade or two. It’s a terrible business model.

Bandholz: I’m looking at the box for your Chisos No. 2. It’s giant. It must cost a pretty penny to ship.

Roman: It does, yes. We offer free shipping for Texans, whether or not they actually live in Texas. Free shipping within the state. If you’re an ex-Texan, reach out. We will still honor it.

Bandholz: Let’s talk about the future. You’ve got Chisos.com. Will it become a lifestyle brand?

Roman: Yes. It started with boots. Having a better product is table stakes.

I make what I want. I’m a customer. I want things a certain way, and the boots reflect that. I wanted a certain type of wallet. I couldn’t find it on the market, so I made one. Those are coming out. Same with other items.

Chisos represents a certain approach to life. We’re hugely Texas-centric. We give a portion of every sale to Texas land conservation. We want wild places such as the Chisos Mountains to keep existing.

Folks that come to Chisos.com care about craft and character.

Bandholz: Talk about your challenges. How do you bounce ideas off of people or lift yourself when you’re in the dumps?

Roman: You can run on adrenaline for a long time, but eventually it catches up to you. I’m figuring out that support system now, especially with this past year of being more isolated.

It’s a struggle. I have a note on the side of my desk. I read it on difficult days. It says, “Have you slept eight hours for the past week? Have you eaten? Have you exercised? Have you seen somebody you love?”

Bandholz: That is incredible advice.

Roman: Very often, the answer to those questions is no. When feeling like dirt, I’m like, “Well, I haven’t done any of the things that are required to feel good.”

When I was younger, I could throw my body into a brick wall, bounce off of it, and I was fine. I could do that day in and day out. I didn’t have to pay my body any attention whatsoever. I do now.

Bandholz: Where can our listeners learn more about you and your company?

Roman: I’m on Twitter and LinkedIn. Our company website is Chisos.com. We have a lot of videos on our YouTube channel. We made an epic video where we chop open our boots and a couple of our competitors’. We’re also on Instagram and Twitter.