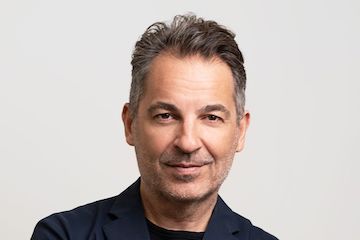 But none did it before Eric Malka. He and his wife, Myriam, devised shaving oils from their kitchen in 1996. Their ensuing company, The Art of Shaving, ultimately sold branded grooming products in locations throughout the U.S. and elsewhere before being acquired by Procter & Gamble in 2009.

The Malkas are passionate about wellness, sustainability, and protecting the planet. Their new company, Ingredients, sells plant-based skincare goods and organic teas.

“Our mission with Ingredients is to encourage the world to remove petrochemicals from personal care products,” Eric told me.

He and I recently discussed his journey. The complete audio interview is embedded below. The transcript that follows is edited for length and clarity.

Eric Bandholz: Tell us about The Art of Shaving. It paved the pathway for premium men’s grooming companies, such as Beardbrand.

Eric Malka: In 1996 my wife Myriam and I developed our own brand of premium shaving products. We were in our 20s. We opened storefronts in the U.S. and elsewhere. Thirteen years later we sold to Proctor & Gamble. It’s now a monster brand that is internationally recognized.

I’m a high school dropout. My wife is a brilliant chemist. She was 22 when she made our pre-shave oil in our kitchen in New York City. I was looking for a way to get out of poverty. Shaving was the way. I’m not particularly passionate about shaving.

We were one of the first men’s grooming brands in the 1990s to make products with botanical ingredients and essential oils for guys, with beautiful aesthetics, elevating men’s grooming.

It was pre-internet when we launched. But the internet soon arrived. We believed that retail had to be more than just selling products. That’s why we started putting barbers in the back of our shops and creating a unique environment.

Bandholz: It’s an amazing story. Those tactics are still relevant today in the world of Amazon.

Malka: We started with a brick-and-mortar location in New York. But soon after was perfect timing to enter distribution channels like the department and specialty stores. So after launching three brick-and-mortar stores, we shifted the strategy to wholesale distribution. That business gave us a lot of visibility and growth, but we hit a ceiling because the sell-through in stores was very weak. That drove us back to our own retail shops.

I told myself, “There’s no distribution channel for this category. I have to create it.” At the time, our three stores were in New York. It wasn’t scalable across the U.S. and into malls. So we created this little jewelry box of a store in 2003 — a few hundred square feet. That became a huge success. We opened them everywhere in the U.S., raising capital to do it. We opened 10 to 15 stores a year starting in 2005.

When we sold the business to Procter & Gamble in 2009, we were doing close to $50 million a year in revenue. Seventy percent of that was from our own retail brick-and-mortar sales. Twenty-five percent was from our wholesale channel. Roughly 15 percent of our retail revenue was services. The rest was products. So we were a product company first and foremost.

Bandholz: How many retail locations did you end up with?

Malka: We had about 50 leases. P&G built another 100 stores on top of that. Now they’re down to two stores.

Bandholz: Is that painful, a bit like losing your baby, so to speak?

Malka: Not at all. I’m focused on my new company, called Ingredients. My babies are my two sons. I wouldn’t sell them to P&G.

Bandholz: Tell us about Ingredients.

We have a passion for wellness, for natural health, for plant-based ingredients, and for being honest with consumers. That’s what Ingredients stands for. With The Art of Shaving, as a struggling entrepreneur, all I cared about was building, scaling, selling.

I needed financial freedom to do what I always wanted, which is to impact the planet. Our mission with Ingredients is to encourage the world to remove petrochemicals from personal care products, household cleaners, foods, and drinks.

Ingredients is all about disrupting the industry. We’re on a mission. We’re exposing the whole industry — hiding ingredients, calling petrochemicals natural fragrances, and things like that. Putting toxic chemicals into products — into people’s hands, children’s hands.

Bandholz: Is Ingredients a direct-to-consumer play?

Malka: Direct-to-consumer, luxury retail, international, distributors. You name it. Our game is make and ship. Whether it’s direct to your house, your grocer, your favorite luxury store, we don’t care.

Bandholz: You don’t just list the ingredients on the label but also the percentage of each. That is essentially your formulation, your trade secret.

Malka: It’s our exact formulation. I’m begging competitors to knock me off. I’m begging the whole world to produce products the way we are without using these petrochemical emulsifiers, binders, fillers, synthetic fragrances, or synthetic preservatives. Just copy our formulas. We’re here to make a change, not just money.

Malka: He’s hitting petrochemicals from one end, and we’re hitting it from the other. We both want to save the planet.

Bandholz: Where can people reach out to you, contact you, or learn more about what you’re building?

Malka: IngredientsWellness.com is our website. Listeners can contact us there. I’m on LinkedIn, Eric Malka. We have a venture capital fund called Strategic Brand Investments, where we invest in up-and-coming entrepreneurial companies. We’re easy to find.