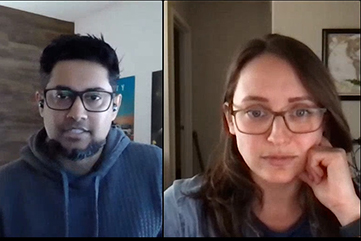 For years, online sellers large and small have depended on targeted advertising to acquire and engage shoppers. But changes at leading tech companies, legislation, and consumer-privacy concerns are hastening the end of individual tracking and some forms of ad targeting.

While not the end of modern digital advertising, the changes are noteworthy.

“We distill this down to the three R’s — rails, regulation, and real people — that are driving the changes,” said Nirish Parsad, a marketing technologist at Tinuiti, an agency, who joined Liz Emery, Tinuiti’s senior director of mobile and ad tech solutions, during a live event with the CommerceCo by Practical Ecommerce community on April 8, 2021.

“Rails are the way that we consume the open internet. That’s through devices and browsers, owned primarily by Apple and Google, and they’re making changes,” Parsad said.

Those changes impact how Apple’s Identifier for Advertisers (IDFA) and Google Chrome (and other web browsers) manage user tracking.

Apple’s IDFA is used to track an individual — often identifiable. Advertisers use it to target individuals with relevant, personalized ads, measure the effectiveness of those ads, and optimize the ads’ conversions.

Apple has announced that it will soon give its customers — iOS users — the option to opt-out of sharing the IDFA. The announcement famously angered Facebook, which believed that the change could significantly restrict its advertising business.

Beyond Apple’s IDFA changes, Google Chrome will soon join Apple’s Safari, Mozilla’s Firefox, Microsoft’s Edge, and the Brave browser in combatting so-called third-party tracking cookies. These cookies — short pieces of code from a domain other than the one the user is visiting — can track individuals across the internet, and even identify a specific visitor to a website if that user is logged in.

The end of third-party cookies and the aforementioned change to the IDFA is changing digital ad targeting.

The changes from Apple and Google may be “in response to regulation, not just in the United States, but internationally as well,” said Parsad. “We’re more familiar as marketers…with GDPR and CCPA, but there is a myriad of other laws [being enacted] across multiple states.”

The European Union’s General Data Protection Regulation (GDPR), the California Consumer Privacy Act (CCPA), and similar legislative initiatives have sought to give consumers more say in when and how they are tracked.

In practice, many websites have made opting out of tracking cookies difficult, confusing, or impossible. Most users simply “accept all” rather than miss out on the content or navigate the process of setting cookie preferences.

“Real people are tired of their data being used however [the ad networks] choose,” said Parsad.

The real people who are concerned about privacy, including data breaches, also have concerns about modern advertising generally.

“Advertisers used to have a limited chance to make a pitch, and that pitch might have been sneaky or annoying, but it was fleeting,” wrote Jaron Lanier in the book, “Ten Arguments for Deleting Your Social Media Accounts Right Now.”

“Furthermore, lots of people saw the same TV or print ad; it wasn’t adapted to individuals. The biggest difference was that you weren’t monitored and assessed all the time so that you could be fed dramatically optimized stimuli — whether ‘content’ or advertising — to engage and alter you,” Lanier wrote.

Lanier and other privacy advocates are concerned that the ability to track individuals is leading to behavior modification. An algorithm designed to “engage” a social media user might actually addict that person. And machine learning meant to optimize ad performance could seek to modify user behavior.

Ads are not going away. But understanding Parsad’s three R’s should provide insights into how your business’s advertising might change. Put your customer’s interests first and you should still find success.